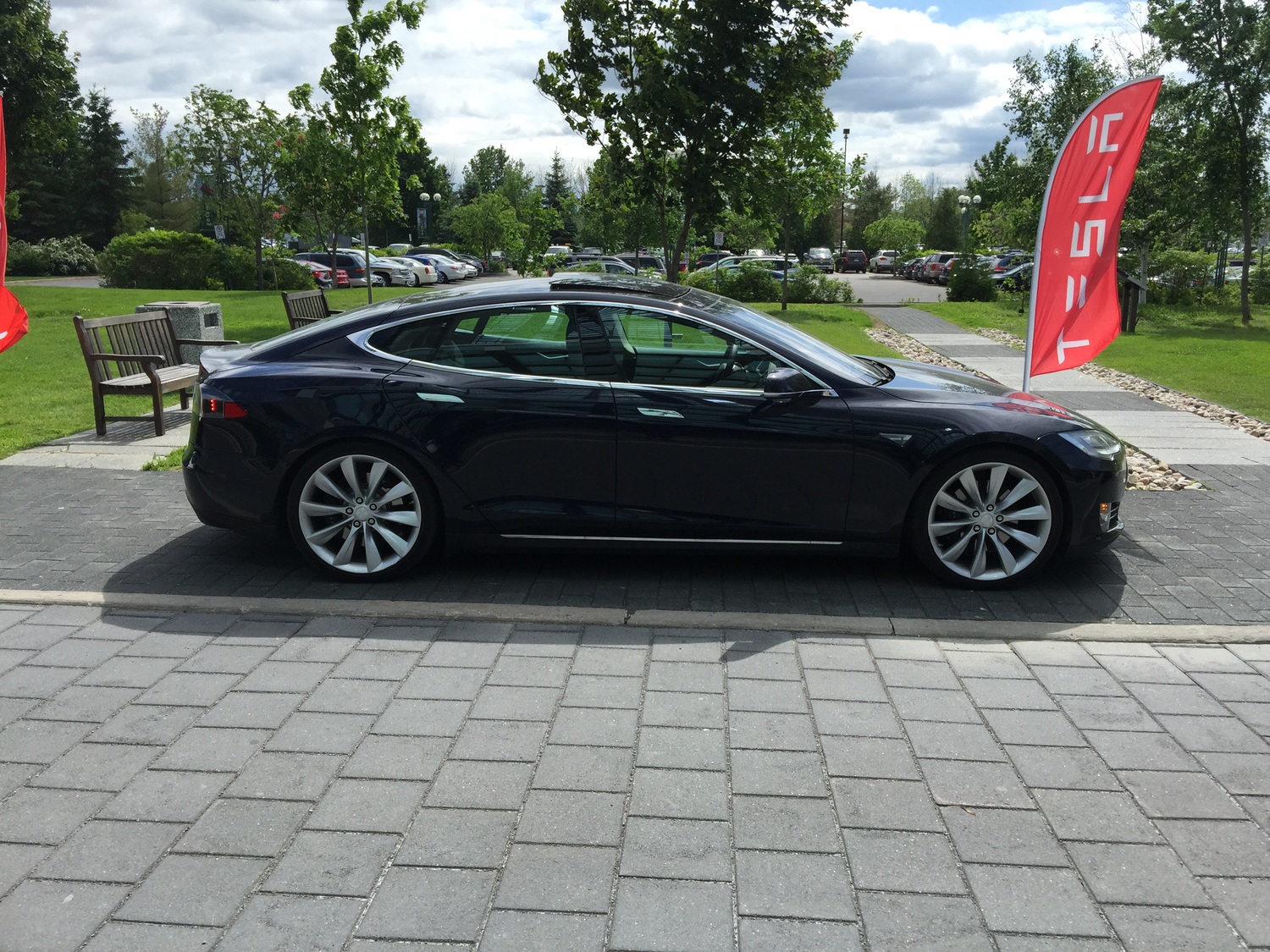 Tesla sent out an e-mail last week about a test drive event being held in Ottawa at the Brookstreet Hotel in Kanata, Ontario. I could not resist the chance to finally test drive a Model S. This quick post will not be a review and will not cover all the features of the Model S as many others online have done a much better job covering those elements. This is not intended as a point by point comparison of both vehicles but the Volt is mentioned throughout to provide some context to my comments.

We have been happy Chevy Volt owners for almost 2 years and are very familiar with what it is like owning an electric vehicle. We have a level 2 charger installed at our home and have used various private chargers in the region, when possible. Regenerative braking, cold winter driving, silent operation, low maintenance and weather impact on range are all part of owning an electric car. You would be surprised at the range hit you take in the rain. There is quite a power draw required to pump the water through the treads of the tire during every rotation. 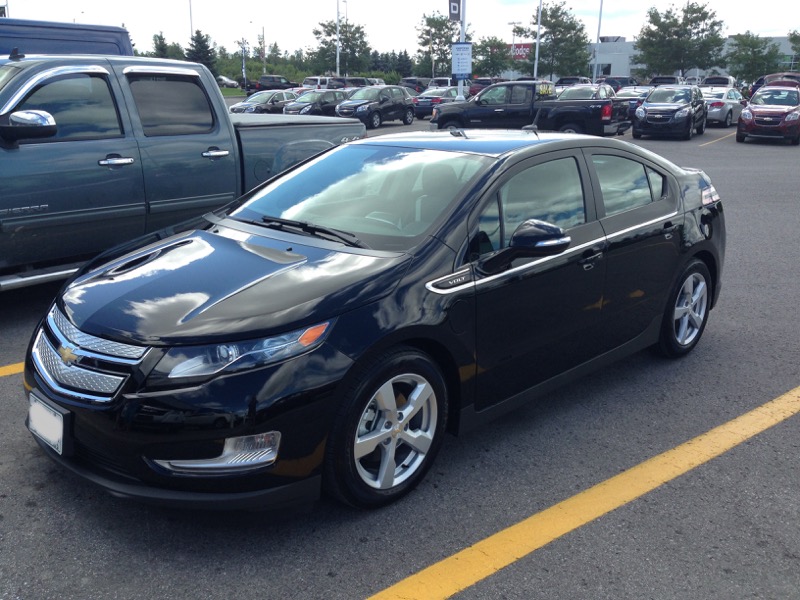 Our 2013 Chevy Volt has a small 16.5 kwh battery that provides a range of 65 kms fully electric range in the summer and 45 kms electric range in the cold Ottawa winter. However, it is different than most electric vehicles because it comes standard with a small gas generator that is used to offer the Volt unlimited range by generating electricity for the battery. Through a series of 3 clutches and the electric motor and a generator, the Volt is quite a feat of engineering. The Chevy Volt also has 4 different riding modes to help manage electric usage as well as 2 levels of regenerative braking. Regenerative braking uses the electric motor itself to provide braking. By doing so, the car is able to generate electricity by simply lifting off the accelerator pedal which turns the motor into a generator.

For the tech nerds, here is a really interesting video of how the powertrain of a Chevy Volt works at different speeds.

We had access to a Tesla Model S 60, 70D, 85D and a P85D. We decided we wanted to try both ends of the scale with regard to performance, the 70D and the P85D. The 70D was pretty bare bones with few options but did have the new seats (more on that later). The P85D was fully loaded including carbon fibre accents in and out, air suspension, panoramic sunroof and many other options. 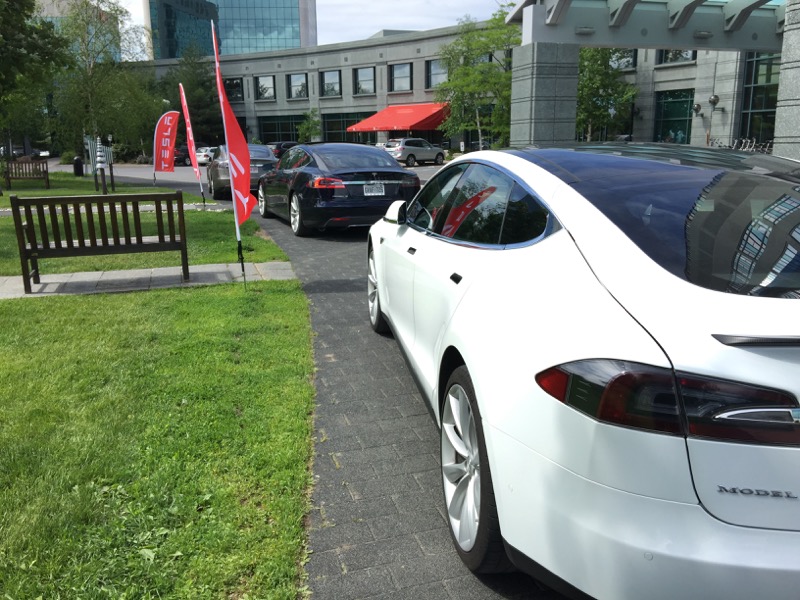 Our first test drive was the new 70D. This model is really the base model at this point for the dual motor cars but still has a range of 385 kms, 329 hp and 0-100 kph time in 5.4 seconds. The quick acceleration time is aided in part by the dual motor which powers all 4 wheels. 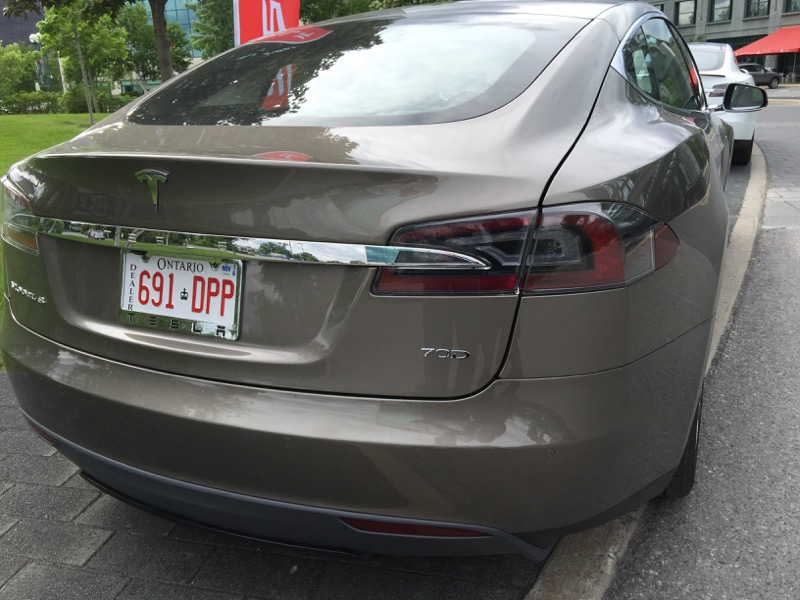 Our test drive lasted about 20 mins and allowed us to explore some rural roads in and around Kanata. The steering was set as stock and the braking regeneration was modest. The card handled quite well. I found that I could easily launch it into and out of a corner and the car was stable regardless of surface. If the dual drive system was compensating for traction, you could not feel it. Compared to the Volt, the 70D was riding on rails. The Volt handles relatively well but you can really feel the difference in the 70D probably due to a lower centre of gravity. There was far less roll.

The steering felt a bit loose with the Model S so the rep change it to the sport setting. Quite a noticeable difference. I could really feel the car in the corners and I felt I could point it more accurately accelerating through the apex. However, even with just regular driving and changing lanes, the car was much more responsive with this small change.

We had a chance to try the acceleration in a straight line as well as coming out of corners. It was absolutely phenomenal! I have had the chance to test drive many performance vehicles and it is hard to think of an experience as exhilarating as this. We are accustomed to the instant torque of an electric motor with the Volt but obviously this at a much higher level.

The default regenerative braking was fine and really non-intrusive. However, part way through the ride I asked him to make it more aggressive. I much prefer the aggressive regeneration. We typically drive our Volt in ‘L’ which provides aggressive regeneration which does extend range noticeably. I was told that the Model S does illuminate the brake lights when releasing the accelerator which is helpful to people following too closely. The Volt does not do this which is something we have grown accustomed to but it is an oversight. Braking with the Volt in the winter also requires some practice. The transition from regen braking to regular barking is quite unsettling coming to a stop. I am told this is not the case with the Model S but I was unable to test it. I would love to try a Model S in a heavy slushy winter day.

While our Tesla did not have autopilot, it did have some interesting options. The car is able to detect the painted lines on the roads and if you venture outside of the lines, it will provide a rumble through the wheel as reminder that you are outside your lane. Also, the car has a forward facing camera to read the speed limit signs. You can set a threshold of say 10 km over the posted speed limit and the car will provide an audible sounds when you reach that limit. As with many cars, the car uses its proximity sensors to determine its position relative to other cars. The dashboard display indicates vehicles in your blindspot but also when parking it provides an actual distance to the obstacle in front or behind you. More autopilot features coming but I don’t have further details at this time.

The final test drive was the top of the line P85D. It comes in at 691 hp, range of 405 kms and 0-100 kph in 3.3 seconds. When compared to a gas engine, it is equivalent to around 800 hp. To say this car is fast is an understatement. We took the P85 on am much shorter route since we already experienced the handling of the 70D this was really about acceleration. 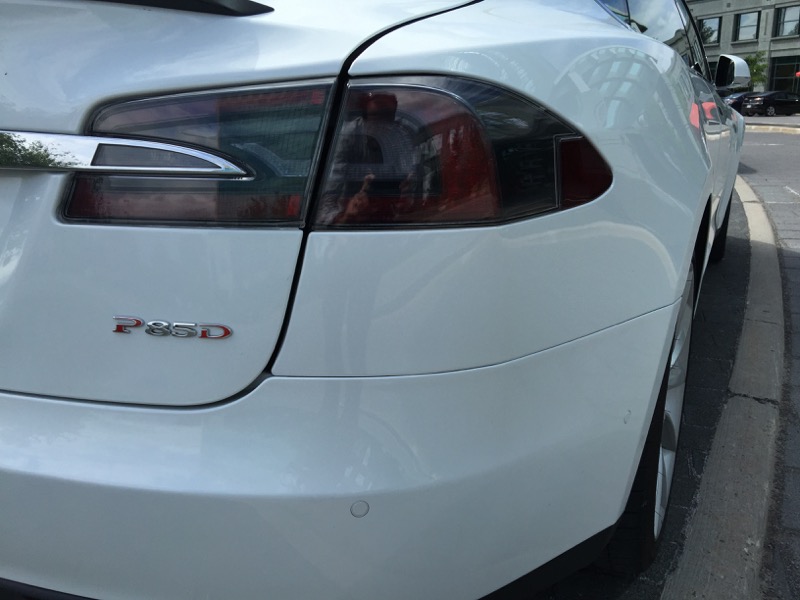 Our Tesla host lowered the car (using the air suspension system), and adjusted the performance to “insane” mode. 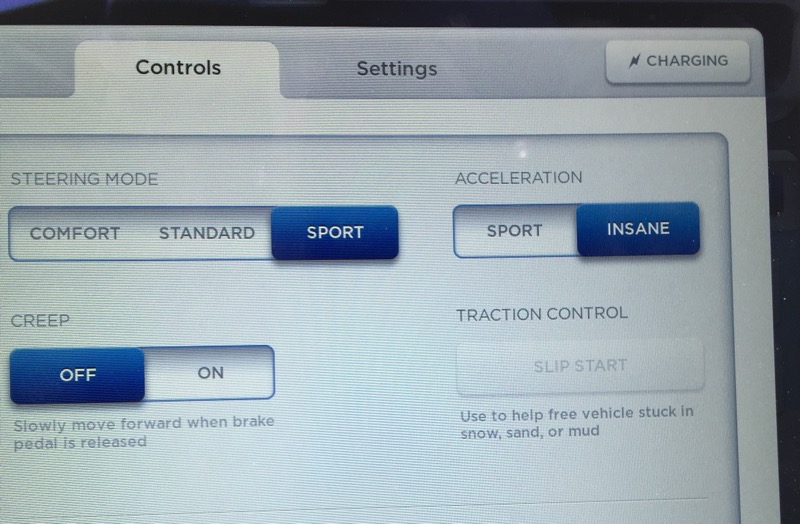 Yes, there is an insane mode. This provides all the power to both motors. There really is no better choice for this mode.

He asked my wife and I to sit in the back seat for a better effect. We left the hotel and moved to a street where acceleration could be tested. He hit then accelerator and it was absolutely amazing! The power is simply incredible and continuous to the point of making me feel light headed. I have never experienced this kind of acceleration in my life. It hit hard and did not relent until he eased off the pedal. He did it one more time and then let me try. Even when I was at the controls and when you know it is coming, it is still crazy insane. All that power, all that torque and no noise. I honestly think it may be near the limit that an average person could handle without passing out. 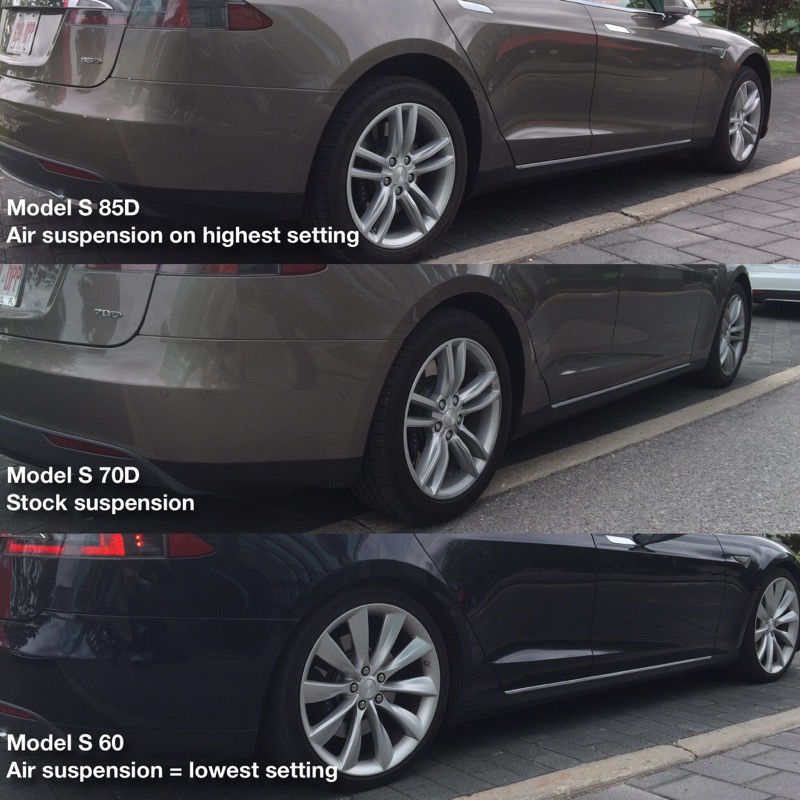 There really is no comparison. At 2.5 to 3 times the price, the Model S is in a class of its own. While they are both electric vehicles, the Tesla gets it right on all counts. The Volt as a 4 seater works well as a commuter vehicle but fails as a family vehicle mostly due to lack of storage. The battery in the Volt removes limits the rear seat to 2 people. The Model S is a true 5 seater sedan with plenty of storage with a trunk in the rear and a “frunk” in the front. Performance wise the Volt is quite good but nowhere close to even the 70D. We have no regrets with our Volt and would seriously consider the next generation but the Tesla is too hard to resist.

Will our next car be a Tesla? Most likely but probably not a Model S because it is priced well beyond our budget. We are eager to see what the pricing looks like for the Model X as well as the Model 3 coming out in a couple years.

Thank you to Mike and John at Tesla for arranging the test drive event and answering all our questions. If Tesla comes to your city or town with a test drive event, you MUST check it out!